The HEX Watch Band is not the first Nano Watch Band we’ve seen, but it looks like it may be the best one so far. It is the slickest and you will have it for $24.99.

The first Watch Band they added a watch strap to the iPod Nano slipped through the Nano’s pocket clip. Unlike the HEX  works much better, with a custom fitted holder that’s also designed to protect the Nano from knocks and scratches.

The silicone Hex strap comes in nine groovy colors, and has a square compartment that the entire Nano can slip into. There’s even a hole for the headphone jack, so you can still listen to your tunes while wearing it.

As the company’s cartoon infographic says, you just pop it in the case, and presto, it’s a watch!What also nice is that it provides some protection for your Nano and has some integrated control buttons.

imagine if the nano had bluetooth capabilities ..wireless headphones would definitely be a plus!…that’s it!.

It Didn’t take much effort for Apple to design the new iPod Nano and iPod Shuffle. All they did was cut the old iPod Nano in Half.

The revamped OS—which is not iOS, sez Apple—doesn’t offer much in the way of new capabilities over the old Nano, since it’s focused on a streamlined control scheme. You navigate just the way you’d expect, by poking around with your finger, and twisting two fingers rotates the screen (if you happen to have it upsidedown?). There’s a home screen which you can populate with your most-used items, rearranged by tapping and holding, just like on iOS devices.

But, alas, gone are the older Nano’s video camera and video playback capabilities—the true multimedia iPod now is the iPod Touch—but the new Nano does photos, which you can manipulate with multitouch.

In a lot of ways this Shuffle is a hybrid of previous generations, which is good! It’s got the buttons and squareish form of two Shuffles ago, while sharing features like VoiceOver and Genius with the most recent Shuffle. The biggest difference from any previous Shuffle, though, is the size: at 1.14 x 1.24 inches, it’s the teeniest iPod yet.

Nixing video altogether is a bummer, and you have to wonder how easy it will be to scroll through your music when your thumb is, you know, covering the whole screen. It’s hard to shit on multitouch, but it’s also hard to imagine what it could be useful for on such a tiny display. Rotating the screen? Why not just, you know, turn the tiny iPod?.

Still, I find the little guy irrationally adorable. That fake bezel makes it look like a tiny little iPad. The nanoest iPad in all the land. And rearrangeable icons for quick access to the stuff you use most is pretty neat, too.

and in iPod Shuffles:

I like a small PMP as much as anybody, but having control over your playlist is essential, especially if you’re using it to exercise. So hooray for the return of those buttons. And the $50 price is pretty sweet. In fact, the only not cool thing about the Shuffle is that you can get the similarly sized but much, much more capable iPod Nano for a hundred bucks more—which might well actually be worth it.

Check Out this pretty cool gadget design for your wrist…The Perfect Watch Band for The New Apple iPod nano….The new multitouch iPod Nano was made to be strapped to a watch band. Here it is, for $17.  All 22mm Maratac Nylon Single piece bands fit the iPod nano perfectly, so you can wear it as watch. Color coordinate your new nano with a variety of different bands including the Mil-Nato series. 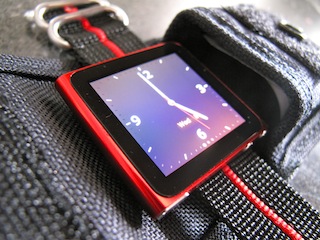 The company also has a lighter case that will hold the nano if you want the thing on your belt.

Having your nano on your wrist would also be a decent way to listen to your tunes while you exercise as well as having a long road trip..