Back to the Future Delorean, Crams 500GB USB Drive 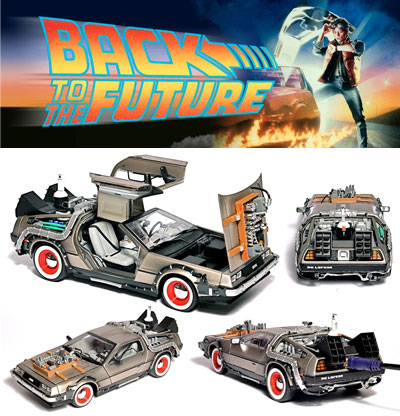 Flash Rods is offering quite possibly the coolest Hard Drive Cars for today, The Delorean Time Machine is a 1:18 scale model of the Back to the Future time machine with a built-in 500GB Seagate hard drive.

The addition of the hard drive leaves no visible modifications to the car itself, except for it isn’t USB 3.0 enabled and doesn’t actually go 88 MPH, but it is sure to be the center piece of any hardcore Geek’s collection. After all, it may not be the fast storage device out there but it certainly is the COOLEST!

The doors and the hood flip up, the wheels roll, and there’s a USB port located on the rear license plate.

The stainless steel hard drive will run you $250.

i3DG Palm Top Theater for your iPhone or iPod,puts 3D movies in the palm of your hand

Palm Top Theater puts 3D movies in the palm of your hand. It is an exhibition consisting of a device called i3DG. i3DG derives from the words”I”,  “3D”, and “Gadget”.

i3DG is invented by Jitsuro Mase, a media artist, and produced by DIRECTIONS, Inc, a Japanese media production company.

i3DG is a playful analog extension to an iPhone or an iPodTouch, converting its 2D display into a layered 3D view. Using the old technique of placing a half-silvered mirror at a 45-degree angle in front of an image, in a new context, the project extends upon 3D displays and iPhones. As a peripheral gadget, i3DG can support a wide range of different applications, from  3Dvideos and animations to accelerometer-based games.

This device lets you enjoy 3D movies right in the palm of your hand without 3D glasses or other gear. Both production and playback of the visuals do not require special technology or equipment, such as shooting imagery with 2 cameras or using complicated CG technique for image production. It has won a prize of an international competition, Ars Electronica Festival 2010 Honorary Mention. 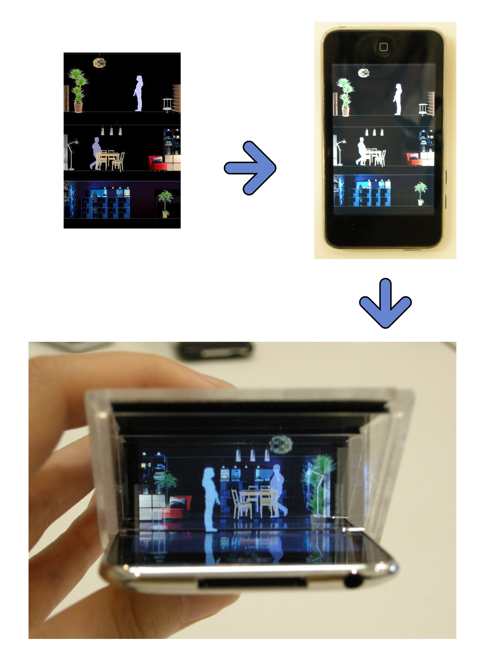