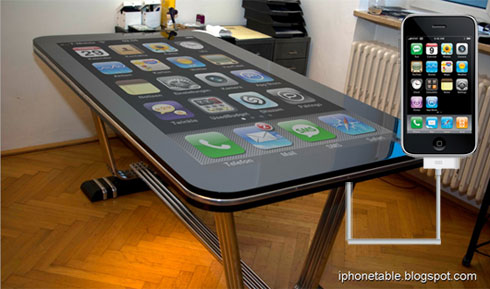 In terms of gadgets, smaller is usually better. Technology company spend more time and money in order to create some of the world’s smallest, sleekest and most lightweight devices. Early next week, however, the giant technology will change gears entirely when it introduces its 58-inch Table Connect for iPhones, the biggest smart phone device you will ever see.

The Table Connect is basically a desktop with iPhone functionality. The huge multi-touch screen is equipped with a 30-pin Dock Connector that lets users hook it up directly to their iPhone. When attached, the Table Connect mirrors everything that is happening on the handset. All of the applications and data that are on the phone can be accessed using the 58″ capacitive multi-touch desktop. With a bit of magic, the table becomes your iPhone.

We are about to put the final touches on the “iPhone Table” prototype. Table Connect for iPhone is what you have been waiting for, multitouch on steroids!

For now, we start with mock-ups as well. Currently, we are finishing up the work on the alpha release software for the table.

The iPhone is attached via the standard dock connector – immediately after it is attached, the magic starts to happen. The entire content of the iPhone’s screen will be projected onto the multitouch table, still giving full access to all the touch gestures using multitouch technology.

Just by looking at pictures of the Table Connect for iPhone, we assume it will probably be out of the price range of most consumers.

XtremeMac Incharge Duo for iPod for US$59.99

XtremeMac has come to the rescue with the new InCharge Duo for iPad (US$59.99), a dual dock that not only provides the necessary 2.1 amps to charge the iPad, but can charge an iPhone or iPod with Dock Connector at the same time.Since your iPad has such good battery life, you can also use the InCharge Duo to charge up any combination of other iDevices while you’re using the iPad. 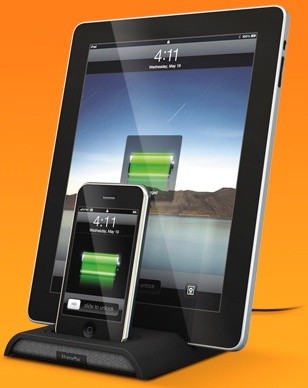 Over the past couple of weeks, two companies have finally evolved the increasingly me-too “iPad stand” category into its natural successor — the iPad dock, combining the prop-up benefits of the many stands we’ve reviewed with the electronic charging components of classic iPod and iPhone docks. But these companies have both gone further, offering multi-device charging stations with room for an iPad in back and at least one iPod or iPhone in front. One of the options is XtremeMac’s InCharge Duo for iPad, while the other is iHome’s iB969 Charging Station for iPod, iPhone + iPad.

The InCharge Duo looks much nicer than some dual chargers I’ve seen and used. It would be perfect for use in a bedroom, as the LEDs are dim enough that they won’t keep anyone but the most severe insomniac awake. It’s a sleek dark grey unit with a tiny logo on the front and two small LEDs that provide charge status.

According to some reviews:

Of the two designs, the one we were at first most inclined to prefer was InCharge Duo, which has a more compact form factor and streamlined design. Measuring 5.5” deep by 4.5” wide and around 0.75” tall in its basic form, InCharge Duo is a black and gray plastic, dual-device charging station with two swappable top plates, a wall adapter, and five universal dock inserts in the package. With the basic plate installed, you have two universal iPod/iPhone wells capable of recharging both devices while inside or outside of most cases, but you can swap the back dock to the iPad-specific plate for full-speed 2.1-Amp charging of a single iPad, standing vertically either alone or behind a smaller Apple device.

Initially, we really liked the way XtremeMac designed InCharge Duo: it has two small lights in front of its iPod/iPhone dock to indicate charging status, looks nice, and doesn’t consume a lot of space. The docks both work as expected, with the front one quickly recharging smaller devices and the rear one offering 2.1-Amp full-speed iPad refueling. The unit has no other frills, such as computer/iTunes synchronization or audio-out, but as a bedside charging station, it just makes a lot of sense. 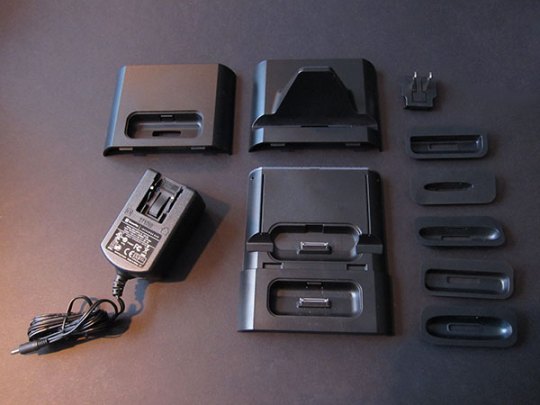 Except for one thing: iPad case compatibility. With the iPad plate on, encased iPads generally won’t work; only if you pull the plate off and take your chances with a physically unsupported but encased iPad might you see that charging’s taking place, albeit without InCharge Duo’s indicator light illuminating properly. Most cases we tried didn’t work at all with InCharge Duo, but certain thin shells did—a shame because this would have been much easier to recommend if the dock could accommodate iPads that were protected. The idea of having to pull a case on and off for recharging is a deal-breaker for us because of the inconvenience factor, but those who don’t use cases will feel otherwise.

iHome’s IB969 takes a very different approach to iPad and multi-device charging—one that’s initially less appealing but turns out to be more practical. Like XtremeMac, iHome has packaged a wall adapter and two iPhone/iPod universal docks inside a black and gray plastic shell, here finished with a metallic gunmetal and soft touch rubber look rather than the matte plastics used in InCharge Duo. This dock is considerably larger, measuring 9” wide by 6.9” deep by nearly 2” tall, including a chunky plastic iPad holder that bulges out of the otherwise ingot-like device. Also inside the box are twin mini-USB to USB cables and a foreign-looking USB to power adapter that turns out to be for Sony’s Reader devices, plus a mini-USB to micro-USB adapter, and two iPhone 3G/3GS-compatible universal dock inserts. Flip iB969 upside down and there are two USB ports on the bottom, ready to connect to the included USB cables or whichever other device-specific ones you may want or need to self-supply.

The net effect of receiving all this stuff in the box, then sorting through it, is to tell a tale of a dock that seems to have originally been designed somewhat questionably for iPod, iPhone, and a Sony Reader to hang out together—a product iHome is incidentally releasing separately as the iB967—then hastily redesigned with a non-electronic iPad tray for the iB969. There are a lot of cables here, three separate oddball switches on the iB969 for different purposes, and a big rubber surface in front of the twin iPod/iPhone docks for the Sony Reader of all things to rest on.

As it turns out, there’s a good reason to bother: despite some initial setup complexity, iB969 turns out to be a really nice nightstand option for multi-device users—a place to drop an iPhone or iPod, an iPad, and your glasses, car keys, or whatever other electronic device you might want to charge at the same time. On one hand, iHome puts iPad users at a disadvantage relative to InCharge Duo by forcing them to supply their own Dock Connector to USB charging cable, which is length-managed by clips under iB969, then fed through the rear plastic tray for connection to the iPad’s bottom. But this approach lets iB969 do something InCharge Duo doesn’t: you can mount your iPad vertically or horizontally in the tray. And because the tray is large enough to accommodate encased iPads, it works under a variety of circumstances XtremeMac’s dock can’t handle. Inside a case, outside a case, upside down, on its right, on its left, or even backwards—the iPad can be placed any way that works for you.It’s also a more powerful charging station. We had an iPad fully charging via the rear 2.1-Amp charger while two iPods or an iPod and iPhone fully charged in the docks in front; 4 total Amps of power can be divided amongst the four total ports if you desire, except that only one port offers high-speed iPad charging. By comparison with InCharge Duo, iB969 is ready to refuel a bunch of devices at once, albeit with only a single very bright blue light on its top surface to indicate that it’s being used for any form of charging. Two of the switches on the unit are on its bottom, letting you toggle the hidden USB ports for Apple and non-Apple device charging; the other one is on the top, letting you switch iB969 into a syncing mode so that the connected devices can interact with iTunes on a Mac or PC using one of the included cables and an outgoing mini-USB port on the unit’s back.