Archive for the ‘Cellphones’ Category

This is one of the finest device from Nokia, I had ever seen. Nokia usually has its finger on the pulse when it comes to new mobile phone designs that appeal to core markets, but we’re more than a little intrigued by the angular approach taken by the new X5-01.

The Nokia X5-01 is a Symbian S60 (3rd gen) device that measures 74x66mm and is 17mm thick, so it certainly isn’t one for those who are shy of pocket. It has full QWERTY slider form factor that has a long list of applications from SMS and email, to IM and social networking.

Multimedia and social networking also seem key to the X5, which offers 24 hours of music playback (plus an alleged 16-day standby and 3.5 hour talk time), and a “spin the phone” option to select random tracks. It also offers support for Ovi Music and the “Comes with Music” service, that has become synonymous with the X-Series phone.

The Nokia X5-01 is a full-blown smartphone too – 600MHz and 256MB RAM put it within a stone’s throw of the Nokia N8 performance. It comes with a 5MP camera.

It’s clearly not a phone that will appeal to everyone, but some will fall for its looks and rectangular charm. And as far as non-touch smartphones go, the Nokia X5-01 actually ranks pretty high on features.

It has a couple of nice tricks too. If you press and hold the volume key, then shake the X5-01 it will “knock” several times – according to how many new messages you have. You can also skip a music track by shaking the phone.

It’s really an eye catching phone and look makes it more wonderful things to go for.

But of course a little disappointments  to find that the X5-01 doesn’t have a GPS receiver. Check out for the list of pros and cons to see what made the cut and what didn’t.

Wouldn’t you like a mobile phone that was built to resemble a Star Trek communicator? Mobile phone maker Nokia, one of Paramount’s promotional partners for the 2009 Star Trek movie, actually built some prototypes of such a device.

Nokia had a little product placement going on in the latest Star Trek movie. When Paramount was looking for promotional partners for the 2009 Star Trek movie, the Finnish mobile phone giant Nokia was a natural fit. In 2009 Nokia (along with Verizon) ran a Star Trek-themed promotional campaign (with websites), and of course they got a bit of in-movie product placement in the dash of the Corvette joyride scene. 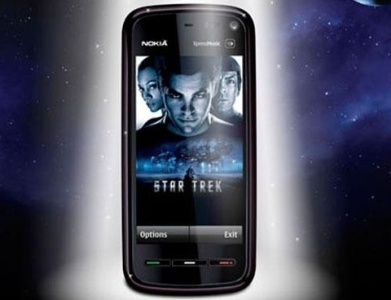 In addition, in Europe they released a special “limited Star Trek edition” of their popular 5800 (non-flip) model cell phone, which was essentially the same phone with some Star Trek-themed content.

However, Nokia built another phone that was never released. Nokia designed a special mobile phone to externally resemble the original Star Trek communicator (from the TV series, not the new movie). They built 14 prototypes of this phone in 2008, which were based on the Nokia N76 flip phone. It isn’t clear if Nokia just built these for fun, or if they were seriously considered as a product.

Michael Fisher(a StarTrek reader) was the lucky winner of one of the 14 prototypes that  recently went up auction on Ebay.  According to Michael the prototype is a fully-working smartphone which he was able to use with a T-Mobile prepaid SIM card. The prototype includes the famous “chirp” when it is flipped open and is loaded with ten custom Star Trek wallpapers, including a few animated moirés. There are also five Trek ringtones pre-loaded. The external redesign of the standard Nokia phone includes a metal “antenna grille” (with the yellow, red, and blue lights underneath) and a starfleet logo embossed into the casing on the back. The attention to detail even includes a tiny etching of the Enterprise on the cover for the USB port.

Hopefully Nokia or some other mobile phone company will take this to the next level and make the Star Trek phone we all want. Alternatively there have been some rumblings of a TOS-era communicator shaped bluetooth device, which could be just as interesting. You can find some custom built bluetooth communicators, but so far there is no officially licensed versions.

An Acer UK spokesperson confirmed to us that the handset, which features a metal backplate, will run Android 2.2 Froyo, and will be on sale at the end of October.

The Acer Liquid Metal is nothing but a rumour posted by a blogger right now, but the accompanying renders look awfully authentic to us. So with a pinch of salt in hand, we’re excited to see the new look design, which appears to combine the odd curves of the original Acer Liquid with a slick metal backplate.

Internally, the Acer Liquid Metal is alleged to pack an 800MHz chip, 512MB of RAM, and a 3.6-inch WVGA capacitive touchscreen, with Dolby Mobile and Bluetooth 3.0, the latter of which has only recently begun to be adopted by the mobile industry. It would supposedly run Android 2.2 “Froyo” as well, though hopefully without the atrocious and confusing software skin Acer draped over the Acer Stream recently.

A hacker named pod2g has now found an exploit to Jailbreak iOS 4.1. This exploit is based on a boot ROM exploit, meaning it targets a low-level part of the OS and Apple can’t patch this with a software update. From what everyone has been saying on Twitter the Jailbreak will work for ALL current devices running iOS 4.1 and it will be called SHAtter. As of right now the jailbreak isn’t complied into a software ready to be released so it may be a few days.

Word around the Twittersphere is that the exploit named SHAtter is in the bootrom section, together with Pwnage 2.0 and 24kpwn which will make all existing devices, including the new iPhone 4 and iPod touch 4G pwned for life! It is obviously not publicly available yet, both theChronic Dev Team and the iPhone Dev Team hackers are hard at work right now trying to get everything ready for full release.

I will of course let you know whenever these new jailbreak and unlock tools for iOS 4.1 are available for download.

Microsoft will Launch its New Mobile OS-Windows7 on Oct.

Microsoft first announced at Mobile World Congress 2010 that it was creating a new mobile operating system to take on Apple and Google. Since then, the company has never announced a date for the launch of the OS, or the devices that are launching alongside it.

According to some commentators :

Looks good. Manuf & feed will be key. So far decent makers with feeds to be determined. Imagine most majors will be on board. Win 7 Ultimate works like a dream. No crashes and runs everything. Waiting on niew IE 9 tho 8 just fine on x32 system.
Having Flash enabled us a plus too. Wouldn’t care for blank web pages.
Test will be how competes with Blackberry and stock broker’s site. Not sure if it can handle a large freestanding stock trading program. Have to test that.
Thanks for ongoing coverage on this.

thanks to Paul Miller

In all seriousness though, the mobile phone industry could use some innovation like this! Here’s a very interesting fake Nokia handset which is made in China. It looks like a BlackBerry, but it has an insane slider mechanism which gives you a pop-out screen by pressing a button on the phone. It’s awkward, but innovative indeed.

According to some Chinese Citizens, they are impressed by the innovation of this Nokia knockoff phone. It’s maybe the craziest phone yet, featuring a pop out screen which may frighten you. For the tech specs, it includes a 2.2 inch display (240 X 400), dual SIM, dual cameras, FM radio, Java, micro SD card slot, Bluetooth, removable battery and video recording. It runs a crappy OS which supports English and Chinese language interface. The phone supports GSM network only, brings you up to 5 hours of calling time and up to 2 weeks of standby juice. For more info’s and specs about N-KIA E68 visit this site http://translate.google.com/translate?js=n&prev=_t&hl=en&ie=UTF-8&layout=2&eotf=1&sl=zh-CN&tl=en&u=http://www.shanzhaihuo.com/sz/12599.html

See the one with circle in red?…Just press that once and the pop out screen appears right in front of you. Cool isn’t it. We love the creativity of this N-KIA E68, the knockoff makers did a really good job for the pop out screen. The phone comes with an extra battery when you purchase, and it’s available in two colors, red or black.

N-KIA E68 kinda cool, though if they made to top bit between the screen and the smaller clear panel clear it would be awesome…Thats cool now why didn’t Nokia think of that one ??..=) but I had to admit that this one shows a very nice concept. I wonder why they named it N-KIA..hmmm..maybe because the mobile handset is short that’s why they shortened the name…kinda cool..Thumbs up!…=)

Samsung I5510 Spotted At IFA

According to some of the bloggers,  the I5510 smartphone was spotted showcased by Samsung at the IFA 2010. The Samsung I5510 appeared on the Vodafone booth touting Android 2.2 Froyo with TouchWiz 3.0 on top of it and a slide-out QWERTY keyboard. The device is expected to cost around 200 Euros at the time of its launch. From the pictures of the device, it looks like a mid-end Android handset and will be a worthy addition to the Galaxy line-up of Android devices from Samsung.

As of now no more details about the handset is available. Launch dates for the I5510 are not known at the moment although it looks finished which means we can expect it relatively soon. At the time of its launch the Samsung I5510 will be available exclusively on the Vodafone network.